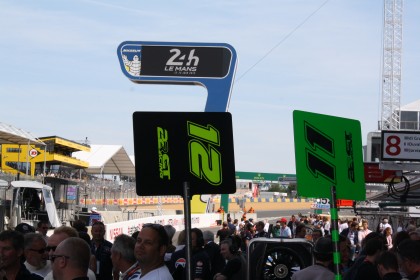 16/6/2015, Derby – It was a mixed weekend for 22GT Racing at the second ever Aston Martin Festival, supporting the legendary Le Mans 24-Hour race. The Derby based team entered three cars into the race: an Aston Martin DBRS9 – driven by team owner Tom Alexander along with guest driver Dave Clarke of JOTA Sport, a Vantage V8 GT4 which was driven by father-son duo Chris and Mika Brown who are currently competing in selected Britcar and Aston Martin Owners Club events. Plus 22GT’s current British GT driver pair Mark Farmer and Jon Barnes who were driving an Aston Martin Vantage Super GT – Hired from TF Sport, as the pair’s regular GT3 car was too badly damaged at Silverstone’s British GT round two weeks prior to make its scheduled appearance in Le Mans.

Tom Alexander and Dave Clarke qualified in 9th and Chris and Mika Brown successfully found themselves in the middle of the GT4 grid in 24th. Whereas Jon Barnes was accused of overtaking on a yellow flag during the session, meaning his lap times were disqualified and the SGT would start from 6th place on the grid rather than 2nd. However, after reviewing the evidence, the decision was reversed on the morning of the race.

On Saturday morning, just hours before the world’s most famous endurance event kicked off, thirty-six Aston Martin’s lined up on start grid of Circuit de la Sarthe and began their formation lap. Barnes, despite starting from P2, was at the front of the grid as Stuart Hall’s Gulf Racing for ROFGO LMP1 car started a lap down from the pit lane. Dave Clarke was first out in the DBRS9, whilst 21-year old Mika Brown took the Vantage GT4 wheel first having gained a position on the grid due to TRG having to start from the back of the grid.

Unfortunately, Mika Brown lost control of the Aston Martin Vantage GT4 during his fourth lap – exiting Tertre Rouge. The safety car was promptly deployed to allow essential clean up of the track and repairs to the safety barrier. Whilst the majority of the grid chose to take their mandatory pit stop, giving 22GT’s Tom Alexander and Mark Farmer their chance to experience the Aston Martin DB9RS and Vantage Super GT. However, the strategy did not work in the teams favour as the pit lane was closed for over 12 minutes allowing some competitors to gain an additional lap. The pit lane was reopened with eighteen minutes left on the clock, Mark Farmer directly behind the safety car ready to resume race pace. However, with four minutes remaining the race was red flagged.

The final race classification is still pending, however, Mark Farmer and Jon Barnes picked up 1st in the Invitation Class with their Vantage Super GT during Saturday afternoon’s presentation.

Photo’s for this event are in the Gallery section…..