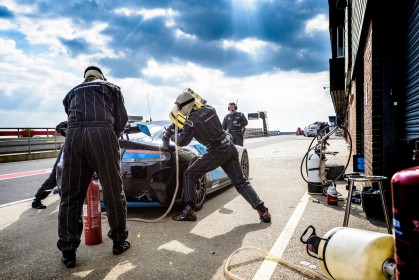 As Mika Brown was absent competing in a triathlon, team manager Nathan Harrison joined Chris Brown at the wheel for the second round of the Cartek Club Enduro round at Snetterton.

Testing a week earlier had gone well and with new Michelin tyres on the car the team was hopeful of a good qualifying position. Chris started the quail session and quickly got down to the teams target time of 2.10.7. Nathan managed to post a time of 2.10.8 on his quail run in the remaining 15 mins of the 30 min session. Our time was good enough for 5th position on the grid of this 29 car field.

Chris started the race and with a cautious opening lap he came through at the end in P6, the next 10 laps were spent racing a rather eager BMW driver who on lap 11 came down the inside hitting Chris whilst taking the position. Chris continued with consistent laps up to the hour mark and bought the car into the pits at the end of lap 28 for a mandatory 3 min pit stop.

With 50 litres of fuel, tyres changed and second driver Nathan Harrison strapped into the car it sat there waiting for over a minute before it was released on track for the remaining hour.

Rejoining in P4 Nathan set about reeling in the M3 BMW that was over 10 seconds ahead. Catching at just over a second a lap it wasn’t long before he was on the back of the M3. Choosing to overtake on the start/finish straight in front of the team and putting in the cars fastest lap of the race to ‘gap’ the M3, all was going well.

A lap later Nathan reported that the gear change had a problem; he decided to pit at the end of lap 39 so the team could investigate. It was quickly clear by the hydraulic fluid that was under the rear of the car that the clutch had a leak that couldn’t be repaired. The car retired with 28 minutes of the race remaining.

Ironically it was a year to the day that we previously had a clutch failure on the same car due to a fractured clip. It was later found that the clutch feed pipe had a ‘pin hole’ where it had rubbed a braided hose which was causing the fluid loss.