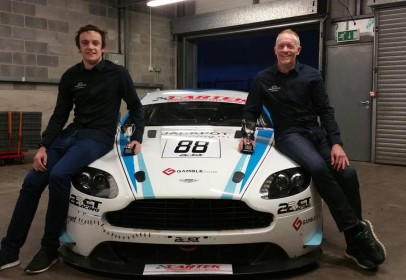 After a long winter break and a dissatisfactory end to crummy 2016 season, driver pairing Chris and Mika Brown were ready to get back behind the wheel of the Aston Martin Vantage GT4 and get racing again. An albeit ‘interesting’ track day at Oulton Park a few months previous was not going to help much so it was back to square one of learning which pedal does what.

The weekend began with a track day on Friday 17th March for Chris and Mika to get used to the set up and Donnington park circuit. Grey clouds were an all day presence but thankfully no rain fell and a decent days practice in the dry ensued. Add in taking some friends round to experience the thrill of the car and you have a pretty relaxed day all round. More importantly, nothing was broken and no damage done.

Race day on Sunday was an early start for all to get the kit ready for a scrutineer who thought it best five people from one car (of which there were a total of 400 cars on the race day) take all their kit down one by one to scrutineering. Potentially the most time efficient method possible for the drivers and teams of 400 cars who all want to get on with the days racing.

Because the race was 120mins long the team preached one thing; get to the finish. There was no point in wrecking the car in qualifying or the start of the race, so the pairing took qualifying relatively easy (without getting a clean lap on the 38 car grid) and still pulled out an 8th, which was soon improved to 7th after the race leader was put to the back of the grid. Its important to mention that all cars at this meeting had to meet certain power to weight ratios to ensure racing all round was as fair as possible. After adding in 150kg of metal plates to the car it was placed into the top category and both were happy with 7th on the grid.

With the distance of the race, it was decided that Chris should go first for his more patient approach. At the second time of asking, 38 cars shot down to turn one in a cloud of dust and rubber and it was hard to tell who was where. When everything settled, Chris came back round in 12th spot but only a short way behind the front few. After settling in Chris managed to consistently single out and pass opponent drivers one by one almost every other lap to work his way back up to sixth within 30mins. Incidents with the cars at the front of the race saw the 22GT car pushed up to fourth at the hour mark for the swap over. Chris was catching third place and, although he pays the bills, was reluctantly pulled in to swap for Mika.

Mika got back out in fourth place with a white BMW catching up behind. In the process of trying to put some ground between himself and the chaser, Mika moved the car up to P2 when a safety car was pulled out. This worked in their favour by moving them a few seconds behind the leader, but also allowed P3 to close in slightly. A poor restart from cars in-between allowed the leader to get away slightly and the chaser to close in. A battle ensued for a few laps before the chasing BMW put his car into the gravel and had to serve a stop-go penalty for a pit stop infringement. Mika was catching the leader and it was looking like they may have a stab at P1 but a puncture with 10mins to go ultimately dashed those dreams. A seriously quick tyre change (using a front right tire on the front left) put the team back out in P3 where they ultimately finished one lap later.

The scenes in the pit lane after the race showed how much the result meant to everyone, especially after having a crappy season last year. It was a well earnt podium and one that came from following pre-race tactics to the tee. Who knows what would have happened without the puncture, but for the now everyone is ecstatic with third