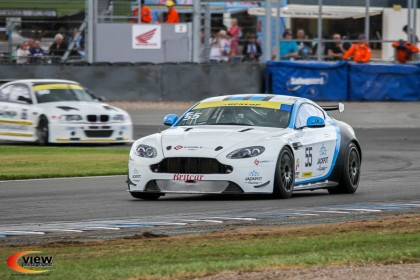 29th July 2015 , Derby – After sustaining extensive damage at the Aston Martin Le Mans Festival the previous month, father and son driver duo Chris and Mika Brown were hoping for a drama-free race at the Donington National race circuit as part of the MSA British Dunlop Endurance Championship in their Aston Martin Vantage GT4 Challenge last weekend. Unfortunately, Brown senior received a shunt on his way down the Craners on his in-lap, which resulted in an unclassified result for the team.

With the pair qualified in P11, Chris Brown was keen to get some track time having missed out on the Le Mans support race in June, after son Mika’s incident at Circuit de le Sarthe. However, the Yorkshire man’s joy at being reunited with the Aston Martin GT4 was short lived after Saturday’s event was cut short after 40 minutes. It didn’t take long for the 22GT Aston to gain a place, moving up to P10 in the first lap as #63 retired, whilst Chris Brown familiarised himself with the 1.98 mile Derbyshire circuit. Brown came into his element on Lap 17, setting a sub 1:18 minute lap time, and continued to make consistent progress in the following eleven laps, setting a personal best lap twenty-seven laps in with a 1:17.099, making him quicker than Martin Schiele who was holding P9 in the BMW M3 Compact. The team encouraged Brown to continue closing the lap which stood at 33.5 seconds before bringing him in on Lap 33 where he would hand over to son Mika, however, the Brown’s race was ended when Chris suffered contact from Osman Yusef’s Radical SR8, sending him into a spin. Brown was unable to restart the Aston’s V8 engine due to missing vital components of the intake system, whilst the team were unfortunately unable to obtain parts on the day for the afternoon’s race.

It is unconfirmed whether the pair will enter into any more rounds of the MSA British Dunlop Endurance Championship in 2015.