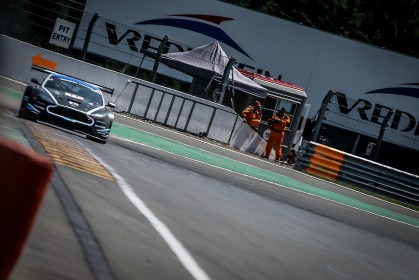 14th July 2015, Derby – Following uncertainty around whether the 22GT GT3 Aston Martin would make it to the only foreign round of the British GT season due to the extensive damage received at Silverstone in May; 22GT Racing worked tirelessly to ensure their attendance at the fifth round of the 2015 Avon Tyres British GT Championship, held at Circuit de Spa-Francorchamps, even managing to secure the third top ten finish of their return to the championship.

The driver duo secured a starting grid position of twelfth for Saturday’s two hour race with Jon Barnes securing a fastest lap time of 2:23.417 on the 4.3 mile Belgian circuit. Mark Farmer proved he was more than ready to once again get behind the wheel of the GT3, successfully setting a personal best of 2:25.696 during Friday’s qualifying session.

Farmer was first out in the 22GT Racing Aston Martin GT3 as air temperatures soared to around 27° Celsius for the midday start. Farmer was quick to demonstrate his skills and understanding of this complex circuit by setting his fastest sector times on lap 4, 5, and 6 (S2 = 1:08.044, S3 = 37.892, and S1 = 41.936 respectively) plus a fastest lap time of 2:28.339 six laps in. Farmer defended P12 well for the first eight laps of the race, but was eventually passed by Ross Wylie’s Von Ryan McLaren. RAM Racing’s Alistair MacKinnon managed to push Farmer down to P14 in the following lap, although the Triple Eight BMW driven by Lee Mowle was stranded at turn 14 with mechanical issues – allowing Farmer to move up into P13 as the safety car was deployed for lap 14. The race resumed in the following lap, however little time elapsed before the safety car returned to the front of the grid after an incident between two of the GT4 field, during which Farmer brought the GT3 car into the pits for a tyre change due to a slow puncture – re-joining the field in P18 under the safety car on Lap 17. Farmer managed two more laps before the pit window opened, as the majority of teams dived into the pit lane for their compulsory driver change – taking full advantage of the safety car lap.

Jon Barnes re-joined the field in P16 but quickly moved up to P14 after passing the Beechdean Aston Martin GT4 driven by Ross Gunn, and Oman Racing’s Aston Martin GT3 driven by Daniel Lloyd on Lap 20 – setting his fastest sector time in S3 of just 37.290 seconds; Barnes then looked to close the gap between him and TF Sport’s Matt Bell (#17) by setting a fastest sector time of 1:07.012 in S2 and his fastest lap time of the race on Lap 23 (2:25.966). However, Bell was able to snatch P12 from the Preci-Spark Mercedes (#22), with Barnes over seven seconds behind the SLS AMG GT3. Barnes took thirteenth place over the course of the following two laps, and found himself once again behind Bell with a gap of almost thirteen seconds separating the two Aston Martin GT3 cars. Unfortunately, the gap grew between the pair before Bell moved up the grid, as the Brussels Racing car retired from the race, leaving Barnes in P12 and over 20 seconds behind Ollie Hancock’s FF Corse Ferrari. Lap 36 provided another move up the grid for Barnes as the TF Sport Aston Martin GT3 driven by Jody Fannin (#27) was forced to retire after contact with RAM Racing’s Mercedes, which fell

down to P10 before returning to the pit lane on Lap 37 – with Barnes able to gain yet another grid position. By this time, Barnes had managed to close the gap between him and Hancock’s Ferrari to successfully pass him, taking P9 on the fourth to final lap which he successfully maintained until the chequered flag fell.

Mark Farmer and Jon Barnes are currently 14th in the driver standings of the 2015 Avon Tyres British GT Championship. The next round sees the championship return to home soil at the iconic Brands Hatch circuit on August 1st/2nd.