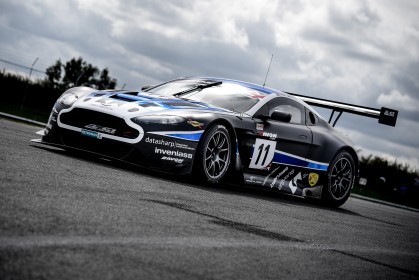 13th September 2015, Derby – In a dramatic end to the season for the Avon Tyres British GT Championship, Derby based team 22GT Racing secured another top ten finish at their home circuit of Donington Park, giving driver pairing Mark Farmer and Jon Barnes joint 13th position in the 2015 British GT3 Driver Championship. Having competed in all nine rounds of the 2015 season, 22GT Racing take 9th place in the British GT3 Teams Championship on their first year returning to the prestigious championship.

Having consistently been disappointed with the qualifying pace, Mark Farmer surprised himself by setting a 1:30.347 lap time, putting him 8th quickest in the amateur’s qualifying session. Barnes, who had come third quickest in the morning’s second free practice session, remained disappointed. He finished his qualifying session twelfth quickest and just 0.4 seconds off Mark Farmer’s best lap time as a tyre fault hampered his flying lap – competing the 2.49 mile circuit in 1:29.962 minutes. A combined time of 3:00.309 offered them 10th on the GT3 grid for Sunday afternoon’s two-hour race, behind Team LNT’s Ginetta (#44) and ahead of the VonRyan McLaren of Salih Yoluc and Euan Hankey (#12).

Sunday’s race was an intense three-way battle for the driver’s championship title, however the dry forecast meant that optimism was lacking in the 22GT garage with both drivers having proved their wet weather driving abilities at Snetterton at the previous round.

22GT’s Bronze driver Mark Farmer begun from the fifth row in P10, although an incident at the first corner moved him almost immediately down to 15th position. Overbraking as the formation lap came to a close meant the Oman Racing Team Aston Martin of Ahmed Al Harthy (#2) was able to get down the inside of the 22GT Aston. Then running wide and onto grass at Redgate, Farmer was passed by the Mercedes’ of RAM Racing’s Bradley Ellis (#30) and #22 driven by Preci-Spark’s David Jones, plus Steve Tandy in the #32 Ginetta (Team LNT), and Hector Lester and his #21 Rosso Verde Ferrari, as well as one of the GT4 pack: Academy Motorsport’s Will Moore in the Aston Martin GT4 driven (#61) – although Moore was reunited with GT4 grid as Farmer was able to use the GT3’s straight line acceleration to move past Moore at Coppice of the same lap.

Not content with being at the back of the GT3 grid, Farmer managed to close the 2.3 second gap between him and Lester in the following laps before squeezing down inside of the Ferrari going out of Craner on Lap 3. Meanwhile, as the race leaders approached the final turn championship contender Marco Attard in the Ecurie Ecosse/Barwell BMW (#1) spun after contact with Derek Johnston’s Aston Martin (#17), leaving Attard in P13, just 1.7seconds ahead of Mark

Farmer. As Attard tried to gain positions, Farmer tried his best to keep up – setting a fastest lap time of 1:31.911 for both Laps 7 and 8. However, Attard’s best attempts to charge back through the GT3 grid were scuppered by GT4 Champion Jamie Chadwick (#407) after the two made contact on Lap 14 at the Melbourne Hairpin, just two laps after another two of the championship contenders, Lee Mowle (#888) and Liam Griffin (#6) had an incident at the same spot which resulted in the retirement of the #6 Aston Martin GT3 of Oman Racing – leaving only Beechdean’s Andrew Howard and Triple Eight’s Mowle to battle for the championship.

The double retirement from the front of grid meant Mark Farmer was now in P12 as the safety car was deployed on Lap 15 to recover #407 and #1. With racing resuming on Lap 20, Farmer’s sights were firmly set on Steve Tandy in the Team LNT Ginetta G55 who was holding P11; the gap grew stood at 2.59 seconds as Tandy set his fastest lap yet, by Lap 29 Farmer was just 0.38 seconds off P11 but was unable to snatch the position before the Ginetta pitted on Lap 31 as the pit window opened.

The 22GT Aston Martin pitted at the end of Lap 33, where it served a 10 second ‘success’ penalty for the teams first podium of the season as Snetterton, before being handed over to professional racing driver Jon Barnes. Barnes rejoined the race ahead of the Rosso Verde Ferrari (#21), now being driven by Benny Simonsen, and behind the champion contender Jonny Adam in the #007 Aston Martin who had dropped down from P5.

Lap 35 saw Jon Barnes put in his fastest lap on the race (1:30.363), whilst Simonsen set the fastest lap of the entire race with a 1:29.273 on Lap 36. Barnes gained another position as the Preci-Spark Mercedes (#22) finally pitted with just 55 minutes remaining, putting him in P10 and now 8.8 seconds behind Mike Simpson in the Ginetta (#32), with Simonsen hot on his tracks. Whilst Simpson managed to pull away from Barnes to take P8, leaving Alex MacDowell to defend P9 from Barnes who was steadily closing in. However behind him, Simonsen was rapidly catching up with the 22GT Aston Martin and it was looking unlikely that Barnes had the upper hand – having just been handed a stop/go penalty for being 25/1000th under the mandatory pit stop time and by Lap 49 Simonsen was just 0.44 seconds behind. The battle continued further, until Lap 52 when Simonsen glided past Barnes on the Esses, then finding themselves caught behind the #44 Ginetta of Rick Parfitt Jnr who was 6 laps down due to an earlier mechanical issue allowing MacDowell to increase his the gap to P9. Although it didn’t take Simonson long before he had snatched P9 from MacDowell, who was now just 1.6 seconds ahead of Barnes’ Aston Martin. It was on Lap 60 that Jon Barnes was finally able to execute a manoeuvre on MacDowell, only to find himself caught behind Dennis Standberg in the Academy Motorsport Aston Martin GT4 (#61) going into turn 6, unable to get away. Barnes then came into the pits to serve the stop/go penalty and emerged in P10 once again: 20 seconds off P9 now held by Andrew Watson in the VonRyan McLaren (#10).

MacDowell, for which Andrew Watson received a 16 second penalty as a result of a post-race investigation. The incident meant Barnes was now just 4.1 seconds off P9, with only one of the GT4 grid separating them. By the time the two Aston Martins reached McLeans on Lap 72 Barnes was just inches away from MacDowells bumper, desperate to get past, which he did as MacDowell braked going into Coppice to take P9 with just eight minutes left on the clock. Barnes then turned his attention to Watson, who had a 10 second lead but unfortunately was unable to close the gap in the remaining five laps. Although Jon Barnes crossed the line in P9, the 16 second penalty for Andrew Watson meant 22GT Racing were promoted to P8 in the final race classification, with Barnes and Farmer taking six points each in the driver standings to finish the GT3 drivers championship with 37.5 points each, in 13th position alongside Adrian Quaife Hobbs and Giles Vannelet. Meanwhile Beechdean’s P5 finish at the Derby circuit gave Jonny Adam and Andrew Howard the points they needed to win the championship – with a total of 156.5 points each.