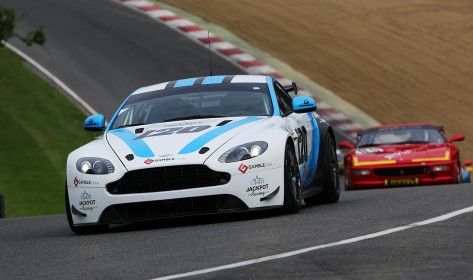 This weekend father-son duo Chris and Mika Brown took part in the GT4/V8 Vantage Cup and Intermarque Challenge with their Jackpot Racing Aston Martin GT4, as part of the Aston Martin Owners Club 80th Anniversary Race Meeting at Kent’s Brands Hatch circuit. Whilst the weekend didn’t begin as the pair had hoped with Mika Brown starting Saturday’s GT4/V8 Vantage Cup race in P2 before moving into the lead only to spin into the gravel at Paddock Hill bend on the first lap. However, their misfortune was short lived as the pair went onto celebrate a podium finish in Sunday’s GT4/V8 Vantage Cup.

Having qualified in second position ahead of British GT’s Richard Taffinder, for Saturday’s GT4/V8 Vantage Cup, Mika Brown was forced to retire the car having completed just four laps after being caught up in a five car incident on the first lap at Paddock Hill Bend. Despite the best efforts of the team to remove the excessive amounts of gravel from the car, Mika wasn’t able to drive the car in its condition.

The afternoon’s Intermarque Challenge, for which the pair qualified 15th after Chris Brown set a fastest lap of 1:49.396, also took place on the full GP circuit. The event saw Aston Martins, Ferraris, Porsches and even a 1968 Mercury Cougar from Barwell Motorsport’s Mark Lemmer battle for supremacy on track. Chris experienced a difficult start, having been passed by five cars as the grid made their way down to Graham Hill Bend, closely followed by #96 (Aston Martin DB4 Lightweight of Simon Watts & Roberto Giordanelli). However, an incident at Westfield for #46 and #47 saw the safety car deployed by the end of the first lap meaning Brown Senior was in P18 for the following laps. Racing resumed on Lap 4 and Lap 5 saw Brown successfully move up the inside of #128 (Alex Thistlethwayte’s Ford Mustang), whilst #98 (Lemmer’s Mercury Cougar) along with the Ferrari 355 Challenge of Tim Mogridge (#4) and Leo Voyazides’ Ford Mustang (#181) were involved in an incident between Hawthorn and Westfield which moved Brown’s Aston Martin GT4 up to P14 – behind Tristan Bradfield’s Sunbeam Tiger (#20) who he passed on the exit of Druids on Lap 6 as the safety car was deployed once more. The green flags were once more waved for Lap 7, with Chris Brown sticking to the inside line at Druids to pass #85 (Ferrari 355 Challenge of David Edge/ Richard Dougal. An overtake on Martin Meiling’s Aston Martin DB4 Lightweight (#34) down the pit straight at the start of Lap 8 provided Brown with P11 and his fastest lap time (1:46.426) just before handing over to son Mika.

As Mika joined the race with just under twenty minutes remaining, race control issued #120 with a stop/go penalty for a safety car infringement (which was later upheld). Having taken an extra trip to the pits, Mika was now in P17 but quickly found his race pace – setting 1:45 lap times instantly. With a gap of over 11 seconds to P16, Brown Junior flew around the 2.4 mile circuit in pursuit of the Sunbeam Tiger (#20), managing to catch site of Bradfield on Lap 17 at Druids before passing him on the pit straight and also passing #28 (Porsche 968 CS) on the Cooper Straight to take P15 by the end of Lap 19 and setting his fastest lap time of 1:44.654 on the following lap. With just three minutes remaining, the race was red flagged with Thistlethwayte’s Mustang off at

Whilst Robin Marriot (#47) and Nicholas King (#59) took advantage of the rolling start, pushing Mika down to P5 by the second corner, the young driver showed he wasn’t going to let the previous day’s events hamper his efforts; remaining within 0.5 seconds of the Stratton Motor Company GT4 for the first six laps before squeezing past through he pit straight on Lap 7. With a gap of just under 9 seconds between P3 (#59), Mika improved his times with every lap (Fastest lap time: Lap 13 – 54.034 secs). However, he simply could not close the gap between him and King’s 1959 Aston Martin DB4. By the end of Lap 27, Mika had closed the gap to just under 4.3 seconds, before handing over to father Chris with 25 minutes remaining of the session.

Maintaining fourth position in the race, Chris Brown continued to hunt down the classic Aston, but instead was met by Marriot’s GT4 in his rear view – eager to battle for P4, along with Desmond Smail who was up in P2. Marriot made a lunge down the inside of Brown at Druids, but Brown remained committed to the inside line. Furthermore, Smail’s attempt to lap Marriot was in fact assisting Brown and on Lap 49, the two collided at Druids allowing Brown to widen the gap to over 11 seconds. It was only a matter of time and in the final few laps, Smail zipped past Brown’s GT4 at Surtees, however, without the distractions going on behind him Chris Brown was able to set his fastest lap time of the race (54.196 seconds) on Lap 51. The chequered flag fell after 54 laps, giving Chris and Mika P4, which in fact still provided them with a podium finish due to Nicholas King (#59) being an invitation entry.

The final event of the AMOC 80th Anniversary Race Meeting was the Intermarque Challenge, for which Chris Brown qualified the pair in P10 with his fastest lap time of 54.628 seconds – a mere 0.9 seconds separating them from David Tinn (#19) who qualified on pole.

Despite the smaller grid compared to the previous day, it was an eventful 45 minutes. Brown was passed by Tim Mogridge in the Ferrari 355 Challenge (#4) only seconds into the first lap, with Joe Jackson’s De Tomas Pantera GT5 (#63) taking the inside line at Druids. Moving round to Surtees, Chris Brown was greeted by Nicholas King’s Aston Martin DB4 (#59) and the Porsche 968 CS of Dietz & Duncan (#28) facing the oncoming traffic. The obstruction on track meant Brown moved past the Pantera GT5, but then struggled to get away – allowing #44 (Aston Martin DBS V8 of Searles/Jardine) and Desmond Smail (#146) who was also in a Vantage GT4 to pass on the left. Brown was now in P11, as the safety car made its first appearance of the race. The green flag was waved at the end of Lap 5 with Brown being caught in a battle with Mogridge for P9 at Surtees before passing him on the pit straight. With several racing laps complete, Chris reached his peak on Lap 11 – setting a 55.712 second lap time

having moved up to P9. A retirement for Tristan Simpson and his Ferrari 355 Challenge (#46) moved the GT4 Jackpot Racing Aston Martin up a further place, with Brown now only 0.8 seconds behind P8 (#44). The DBS V8 simply could not pull away from the more modern GT4 car, which handled the curvature of this compact circuit better; Brown managing to stay within a second of the 1972 Aston for nine laps before the #120 car pitted on Lap 20.

It was now son Mika’s turn, who re-joined the race on Lap 22 behind #79 (Vantage GT4 of Paul and Edward Brunet) before the safety car made another appearance on Lap 24; Mika now caught between Stratton’s Robin Marriot (#47) and Mogridge’s Ferrari (#4). As racing resumed, the #120 Aston Martin was able to make a quick exit from the Ferrari’s view, setting his sights on taking P7 from Marriot. The young driver successfully gained the extra position on Lap 30 at Paddock Hill Bend, only to find himself behind Smail’s GT4 (#146). Mika’s new found confidence shone through at Clark Bend on Lap 32 as he took full advantage of Smail going wide, holding the inside line to see him move up to P6. Despite setting his fastest lap time of 54.553 seconds on Lap 41, Mika was unable to close the 8-second gap between him and Steve Atkinson’s Porsche 968 (#50), and the chequered flag fell after 45 minutes with the pair having completed a total of 44 laps – and a final classification of P6.

Images for this event are in the Gallery section…..