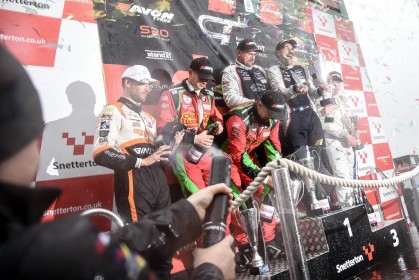 August 26th 2015, Derby – Just when it seemed the 2015 season was to be full of nothing but setbacks for 22GT Racing and their return to the British GT championship, Jon Barnes and Mark Farmer were thrilled to finish in the top three on the second-to-last round of the season. Rounds 7 and 8 of the 2015 Avon Tyres British GT Championship – each a one hour race, were hosted at East Anglia’s Snetterton 300 circuit.

Initial disappointment and mounting frustration was felt once again with the Aston Martin’s qualifying pace despite a clutch change for the GT3 car after the second free practice session. Mark Farmer finished Saturday’s qualifying session in P12 whilst Jon Barnes only managed to qualify 11th amongst the pro drivers. “We’ve proved we’ve got the race pace, we’re just being hampered by our qualifying pace. We need to figure it out if we’re going to achieve a podium but it’s just not possible when you start from the back of the grid” said Barnes. Farmer said of Barnes’ qualifying result “Jon was two seconds off the session leaser – he’s never been two seconds off in his life!”

Farmer started from P12 in Race 1 on Sunday – behind Preci-Spark’s Godfrey Jones (#22) however, Farmer found himself up in P9 by the end of the first lap -behind Lee Mowle’s Triple Eight BMW but ahead of Rick Parfitt Jr’s Ginetta (#44). By the start of Lap 4 Parfitt had closed the gap from over 7 seconds to just under 0.3 seconds, but Farmer defended well by setting a lap time of 1:53.657 on Lap 4 before setting his fastest lap time (1:53.419) on the following lap – now 1.9 seconds behind Mowle.  Lap 7 saw Mowle move up to P7, ahead of Attard’s Ecurie Ecosse Barwell BMW, whilst Parfitt who was just 0.411 seconds behind Farmer, continued his quest for ninth.

Lap 10 saw Parfitt’s Ginetta and Alistair MacKinnon in the RAM Racing Mercedes (#10) squeeze Farmer down to P11, who then made contact with MacKinnon at Riches, sending them both into a spin. The 22GT Aston managed to return to P10, now 9.7 seconds behind Team LNT’s Rick Parfitt Jnr (#44) before coming into pit at the end of Lap 13 for 22GT’s pro driver Jon Barnes to take over with 35 minutes remaining of the race. Having been one of the first teams to pit, the #11 Aston Martin found itself in P10 once more, behind #888 which had to serve a penalty during its pit stop. Jon Barnes moved back up to P9 on Lap 16 as the Preci-Spark Mercedes (#22) pitted, whilst Barnes set his fastest lap time of 1:52.221. Ryan Ratcliffe in the #44 Ginetta ran into trouble on Lap 18 which saw it retire, as Barnes took P8, sandwiched between Joe Osborne (#888) and Mike Simpson’s Ginetta GT3 (#32) – who was closely followed by Sims in the BMW Z4 (#1); the latter three separated by just 0.45 seconds by the end of Lap 19. As Sims worked his way through the grid, eventually knocking Barnes back to P9 on Lap 23 with Simpson moving the Ginetta (#32) past Barnes in the following lap. Barnes wasn’t prepared to settle for P10 and on Lap 26 took back P9 from Oman Racing Team’s Alex MacDowell (#2) only to find himself behind the #32 Ginetta once more. With three laps remaining Sims made contact on the exit at Oggies with the Ginetta sending it sideways and into retirement on the following lap, offering Barnes P8, which he held until the chequered flag, fell. Due to a 30 second penalty in lieu of a drive through penalty for Barwell’s Ecurie Ecosse car (#1), 22GT Racing were classified seventh, meanwhile the podium was one of solely Aston Martins: Oman Racing Team (P1), followed by TF Sport who classified P2&3.

It wasn’t long until rain started falling around Snetterton meaning the 22GT Aston started the second race of the day on wet weather tyres, as declared a wet race by the race officials. Having initially qualified in P11, events from the day’s first race meant that Jon Barnes instead started from ninth place; the FF Corse Ferrari (#18) received a five-place grid penalty from Race 1, whilst Ginetta’s withdrew their #32 car.

After two warm-up laps behind the safety car, the tracks slippery conditions quickly took hold of Sims in the Barwell BMW (#1) who went from pole position to the back of the grid after spinning in front of Butcher’s Oman Aston Martin (#6) at Montreal, whilst attempting to re-pass Jonny Adams #007 Aston, puncturing the Z4’s right front tyre and damaging the front-end of Butcher’s Aston. Further down the grid, the Von Ryan McLaren (#10) had also suffered a puncture with Jon Barnes up to P6 by the end of the first lap.

A tag team manoeuvre at Bomb Hole on Lap 8 from Matt Bell in the TF Sport Aston Martin (#17) and Barnes in the 22GT Aston Martin knocked Osborne’s BMW Z4 down to P5, with Barnes now 4th and Bell in P3. Barnes managed to pull away from Joe Osborne (#888), extending the gap to just over 3 seconds, with Barnes bringing the 22GT Aston into pit at the end of Lap 14 with just over a minute remaining of the pit window.

Mark Farmer emerged behind the Triple Eight Z4, which was now being driven by Lee Mowle, ahead of Derek Johnston in the #17 Aston Martin Vantage GT3 by 8.65 seconds. Although Lee Mowle’s excursion onto the grass as the Montreal hairpin put him back in 5th place, giving Mark Farmer P3 with just over 20 minutes remaining. 22GT Racing’s Mark Farmer went on to set his fastest lap time of 2:14.810 minutes, extending the gap between the two Astons to almost 17 seconds. As weather conditions got increasingly treacherous, Farmer spun at the Bomb Hole only to be passed by Rick Parfitt Jnr. (#44) as the red flags went up around the circuit meaning Mark Farmer and Jon Barnes received their first podium of the season with a third place finish.

Jon Barnes said: “I thought it would be emotional getting on the podium after seven years, but we earned this. Hopefully it won’t take that long before me and Mark can get another one. A massive, massive thanks to Mark for the opportunity to drive alongside him this year and thanks to all of the team for the time, effort and long hours so far”

The pair’s achievement at Snetterton moves them up to thirteenth place in the 2015 championship standings. The final round of the British GT season takes place at Donington Park, Derbyshire on 12th and 13th September 2015, which will be 22GT Racing’s home race.