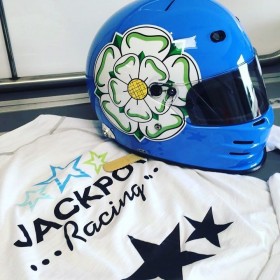 GT Cup returned to Donington Park, this time to attack the 2.49 mile GP Circuit, having already visited the East Midlands National circuit for the initial GT Cup round in April.

The weekend kicked off with a double dose of 25-minute sprint races on the Saturday. The first qualifying session of the weekend saw championship contender Richard Chamberlain withdraw the #5 Porsche with engine issues, whilst Chris Brown qualified 19th overall for the father-son pair with a lap time of 1:42.125, with just 20 seconds remaining of the session.

However, it was son Mika that drove in the weekend’s first sprint race,  starting from P18 due to the withdrawal of Chamberlain.There was a first lap incident between Jeff Wyatt’s Lamborghini and Paul Bailey in the #28 Ferrari, which meant the Lamborghini fell down to last place as it limped into the pits, as the #99 BMW also retired from the race – giving Mika P15. But by the end of the third lap, Brown was just 7/100ths of a second ahead of the #57 Saker. Then on Lap four, the Saker Rapx, driven by Purbrick managed to split the three Aston Martins, moving past both #88 and the newcomer #26 Aston Martin GT4 who was sat just behind the #9 Aston GT4 of Dean Gibbs.

After a trip into the gravel for Brown on Lap 6, the #88 Aston was now down in P17, behind the #47 McLaren. As the McLaren continued to gain position, that left the two Aston Martin’s to battle it out and on Lap 11, Brown moved back up to P16 and opened the gap up to almost 2 seconds, trying to catch the #57 Saker Rapx. The #58 McLaren of Proctor ran into difficulties on the following lap, dropping 12 places and ending up in the pits, moving Mika up to P15. Whilst Mika completed his fastest lap time on Lap 13 of 1:41.457 – just 0.2 seconds slower than the Saker, the gap was still over a second wide. Mika took the chequered flag in P15, just 0.5 seconds behind the Saker.

The battle between the #88 and #26 Aston GT4s continued into the second race of the day, with Chris Brown having started from 17th on the grid and the #26 Aston of Cripps starting alongside him from 18th place, although the #57 Saker was not present on the grid. Chris’ start meant he was quickly passed by the #99 BMW of Martin Webb and Cripps’ #26 Aston. Despite going quicker than the #26 Aston on Lap 3, the gap was now up to over 2 seconds, but by Lap 6, Chris had narrowed the gap to 0.6 seconds. Determined to catch the Aston Martin ahead, the second half of the session saw Chris set quicker lap times on six out of the seven laps; setting his fastest lap time on Lap 14 (1:40.349) – putting him faster than both Aston Martins and the #47 McLaren. Brown finally closed the gap between him and Cripps on the final lap, side by side down the Dunlop Straight. Chris finished P18, just 0.4 seconds off Cripps.

Despite a red flagged session during Sunday’s 50-minute pit stop race and several incidents involving contact for the #88 Aston, the Brown duo managed their best finish yet. Having qualified 17th with a 1:40.125 lap time from Mika Brown after contact with the #48 Ginetta in the mornings qualifying session, the #88 Aston Martin started on Row 9. Sandwiched between the other two Aston Martin GT4 machines, and also ahead of the #31 Porsche of father-daughter Dean and Esmee Hawkey, after Esmee fell foul to the Fogarty Esses in qualifying.

Lap 1 saw a big shuffle at the back of the grid as Gibbs in the #9 Aston went off at Redgate, as the #26 Aston along with the #31 Porsche got past Mika. Adamant to continue the rivalry from the day before, Mika was steadily closing in on Cripps before spinning at Coppice, unable to get free from the gravel. As the team began accepting the premature end to their weekend, Neil Huggings in the #44 Lamborghini caused a red flag to the session by ploughing into the tyre wall as Macleans with 37 minutes remaining. This allowed Mika to recover himself from the gravel and limp the Aston back to the pits as the tyre wall was reconstructed. The decision was made that the race would be restarted with 30 minutes on the clock, with a 10-minute pit window after 10 minutes.

But drama commenced almost immediately, with John Dhillon in the #13 Ferrari taking the lead before spinning and ending up behind Mika in last place. Three laps in and the #47 McLaren was forced to stop on track, leading to the safety car being deployed with just a minute to go before the pit window opened.Whilst some of the field managed to get into the pits at the end of their 4th lap, the majority of the grid came in on the end of Lap 5 causing a chaotic pit lane, as Chris Brown took over the #88 Aston Martin. Dean Gibbs in the #9 Aston was unable to get away quick enough, enabling Brown to emerge in front in P6. Whilst Brown struggled to keep the GTO, GTB, and some of the GTA class behind him, ending up in P11 by the end of the 8th lap after coming together with Dean Gibbs in the #9 Aston. As the grid began their 11th lap of the GP circuit, Brown was down to P14, but still holding off Brent Millage in the #54 Ginetta with a 0.3 second lead. As race leader Adam Wilcox began the penultimate lap, the three Aston Martin GT4’s had bunched back up, with just 0.9 separating them – still holding off Millage in the #54 Ginetta, Webb’s #99 BMW, and Hawkey’s #31 Porsche. Chris Brown took the chequered flag in P13 overall and 4th in the GTA class, giving the Brown pair their best finish of the season, and putting them 4th in the 2016 GTA Championship.