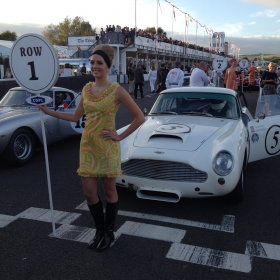 16th September 2016, Derby – New for 2016, the Kinrara Trophy was the first race of this years Goodwood Revival weekend. The one-hour, two-driver race for pre-1963 closed cockpit cars saw the 1960 Aston Martin DB4GT of Tom Alexander and co-driver Adrian Willmott pushed to its limits as dusk fell on the West Sussex circuit.

Having qualified second to the #15 Ferrari 250GTO SWB of Joe Macari and Le Mans winner Tom Christensen, Willmott was first out in the #5 Aston Martin, lining up on the front row alongside Macari and the #6 DB4GT of Dalglish. Having initially struggled to get of the line, it wasn’t long until Willmott was leading the 30-car grid after moving past Macari along with Rob Hall’s #33 Jaguar E-Type going into Madgwick – eager to snatch the lead from Willmott. By the end of the third lap Hall was just 0.54 seconds off P1, and with four laps complete, and his quickest lap of the race set (1:31.428), Willmott conceded the lead to the E-Type; locking up down the hill into St Marys. However, the former Formula Palmer Audi champion wasn’t going to let him get away lightly; throwing the Aston sideways into the corner and hammering the 1960 GT car down the straights – sticking right on Hall’s bumper. However, Hall’s faultless drive gave no let up for Willmott to squeeze through.

Despite getting to within 1/100th of a second of Hall on Lap 8, Willmott’s chase came to an abrupt end. In a rather overzealous attempt to get past Hall, he locked up braking into Woodcote, sliding in front of the E-Type and traveled backwards off-track, bumping into the tyre wall. More determined than ever, a flicker of flames from the DB4GT’s tail pipes meant Willmott was back in the race – rejoining in P5 behind Dalglish’s #6 DB4GT. By the end of Lap 10 Willmott was back in in P3, behind James Cottingham’s E-Type and setting a lap time 0.3 seconds quicker than the #73 Jaguar. However, any further progress for Willmott was hampered by a safety car, which had been brought out for Dalglish’s Aston. Whilst Cottingham and Hall continued their way around the 2.4-mile Sussex circuit, Willmott was stuck behind the safety car as #6 was recovered.

After the safety car returned to the pits, there was a flurry in the time-honored pit-lane whilst driver changes were completed. As the leading Jaguars pitted, Willmott moved back up to P1. The last car to pit, the #5 Aston was handed over to Tom Alexander, who rejoined the race with just 17 minutes remaining in P7. Having slipped to P10, an issue for the iconic #16 Ferrari Breadvan gave Alexander P9 once again. As the sun continued to set, the headlights of the remaining twenty-three GT cars were met by the checkered flag – Alexander and Wilmott taking P9 overall.