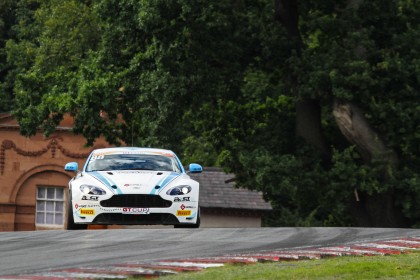 27th July 2016, Derby – A weekend worth of drama was packed into just one minute, as GT Cup travelled to Cheshire’s Oulton Park International circuit. The Saturday double-header saw Rounds 13 and 14 condensed into one day. However, a incident on the first corner of Lap 1 between the #18 Lamborghini Huracan, #7 Lotus Evora, and #3 BMW M3 required red flags and eventually, due to delayed recovery, an announcement that Round 13 would be rescheduled later in the season considering the tight timetable for the one day meeting. Fortunately, Chris Brown who started the red-flagged session in P21, avoided the incident at the front of the field plus a further incident between the #9 Aston Martin GT4 and #12 Audi who were also involved in a spin at Old Hall Corner.

The morning’s qualifying session saw Chris set his quickest lap time of 1:56.413, whilst son Mika made his last lap count and set a 1:52.584, just 1.9 seconds off the other Aston GT4 of the field. Mika’s quickest lap meant the pair qualified 21st – alongside the #12 Audi R8 of Hudson/Wilcox and just behind the Aston Martin GT4 of Gibbs.

Round thirteen’s qualifying results were carried forward to the afternoon’s pit-stop race, with the exception of #18 and #7 which both sustained excessive damage in the morning’s incident. The withdrawal of the two GTO cars meant the #88 Aston Martin moved up to P19 on the grid, with 22 year-old Mika Brown taking the driving seat first.

The #99 BMW of Martin Webb was missing from the grid, giving Mika Brown an additional place on the grid. However, as the cars completed their formation lap and the green flag fell, Mika could not hold back the #12 Audi but by the second lap Brown had set a lap time just 0.2 seconds slower than Gibbs in the #9 Aston, putting him just 2.1 seconds off P18.

By Lap 4, it was three hundredths of a second separating the two Aston’s lap times, with Mika setting a lap time 0.6 seconds quicker than Gibbs with the gap to P18 now 2.2 seconds by the end of Lap 5. Thirteen minutes into the 50-minute race, the #33 Porsche returned to the pits with issues; their prolonged pit-stop playing to the advantage of Brown who was now in P18. Furthermore, the #12 was also forced into the pits to retire, moving Mika up to P17 and 2.4 seconds behind Gibbs’ Aston Martin GT4. It was Lap 10 that where Mika peaked, setting a lap time of 1:50.189 – 0.8 slower than Gibbs. However, the two Astons were now separated by the #11 Chevron GT4 after Gibbs managed to pass Grimes, who was only 1.76 seconds ahead of Brown.

Mika completed 15 laps of the 2.69 mile circuit before pitting and handing over to his dad Chris, who promptly snatched P16 from Grimes, although the Chevron GT4 made a return to sixteenth on the following lap – Brown now in P17.

The #35 Porsche 997 of Evans spun at the first corner on Lap 18 and was not able to return to racing, whilst the #16 Porsche 991 did not emerge from the pits with just 14 minutes remaining, meaning Brown was now sitting in P15. However, Grimes’ Chevron was now 34 seconds ahead of Browns Aston Martin. Brown took P15 overall (6th in class) at the chequered flag having demonstrated his triathlete perseverance to complete his penultimate lap in 1:54.9 minutes, followed by his fastest lap time from his last lap (1:54.1 minute).

Father and son, Chris and Mika Brown are currently 5th in the 2016 GTA Championship Standings. Plus, Chris’ outstanding performance at Oulton Park saw him collect the Sunoco Driver of the Weekend trophy.