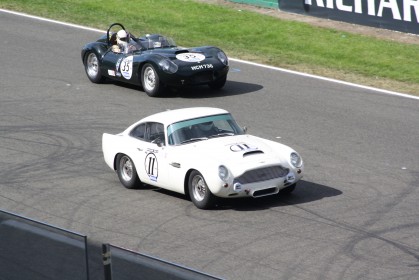 14th July 2016, Derby – Last week, 22GT Racing packed up their Derby workshop to begin the thousand-mile round trip to Le Mans Classic. The 2016 edition of the biennial event was the forth time team owner, Tom Alexander, alongside long-standing friend and co-driver Adrian Willmott have taken on the famed 38-turn, 8.469-mile Circuit de la Sarthe in Le Mans, France with their 1960 Aston Martin DB4GT – the current lap record holder for a DB4GT at Le Mans, set at the 2012 edition of this remarkable event.

Staged over the weekend of 8-10 July, the eighth edition of Le Mans Classic saw more than 120,000 classic car enthusiasts pay homage to this exceptional collection of automobiles, each having earned a place in the history books of the Le Mans 24 Hours. The weekend saw six grids complete in three races each over a period of 24 hours, with the classic Aston GT car competing against 74 other cars built between 1957-1961 in Plateau 3. The prospect of returning home with a podium finish was within reach for most of the weekend, however, an unexpected gearbox issue meant the Aston was forced to retire in it’s final race having started from the front row – ending the weekend 27th overall.

Having qualified third for their first race of the weekend, Adrian Willmott volunteered for the traditional and rather theatrical Le Mans Start, which saw track temperatures reach 45 degrees Celsius despite the late evening start. Unfortunately, several cars fell victim to the sweltering conditions with one Lotus even catching alight as it tried to get away.

Willmott settled quickly into the 1960s British GT car, setting his fastest sector two and three times on his first lap despite losing a position in the first sector of Lap 1 to the 1961 #47 Maserati Birdcage having stormed through the grid from fifth position. Willmott managed to remain in the top three for his 5-lap stint, with the #46 Tojeiro Jaguar of Cottingham retiring on Lap 1; quickly opening the gap to P3 up to 7.5 seconds by the end of the second lap, and setting a quickest lap on Lap 3 (4:59.267 minutes). After handing over to Tom Alexander, the classic Aston rejoined the race P4, having missed out to Chris Ward in his 1959 Lister Costin who had opened the gap to P3 to over a minute over the course of the following two laps. Having accepted missing out on a top three finish prematurely, issues for the #35 1958 Lister Jaguar of Brooks/Beebee on the final lap meant Alexander in fact went on to take P3 at the chequered flag, despite receiving a 60-second penalty for not obeying slow zones.

Setting the fifth quickest lap time in Race 1 meant the #11 Aston Martin started the second race of the weekend from P5, driven by Tom Alexander. Having caught a few hours sleep, drivers and crews were awoken to news of incidents and red flags that occurred in the small hours of Sunday morning.

Having initially slipped to P6, having lost out to the Maserati T61 Birdcage (#18) and the #33 Lotus XV, the poor visibility meant a safety car was called on Lap 1 for the #54 AC Ace, who was holding P2; which unfortunately closed the gap between the #11 Aston and the #12 Austin Healey, who was keen to snatch P6 from Alexander. Lap 3 saw the safety car return to the pits and a battle commenced with the #37 Austin Healy for position, only for Alexander to pit at

the end of Lap 3. Now driven by Adrian Willmott, the DB4GT rejoined in P12. It didn’t take long for the grid to shuffle back into place, with #11 back in P4, and the #18 Maserati forced to retire. Willmott, a former Formula Palmer Audi champion, then set about closing the gap to P3, narrowing it by more than 12 seconds over the final two laps, to finish 9.7 seconds behind the #35 Lister Jaguar.

Willmott successfully conquered Sector 1 in the dark, having set two consecutive fastest sector times for the entire session (48.162 secs on Lap 6) before taking the chequered flag fourth overall. However, the #33 Lotus XV received a penalty for pit stop infringement, giving Willmott and Alexander their second top three finish of the weekend. Furthermore, Willmott’s quickest lap time of 5:00.965 minutes, just 1.8 seconds off his quickest daytime lap time, translated into a front row start in P2 for the weekend’s final race.

Unfortunately, the good results were to sadly end there as the team missed out on the podium they had been so hopeful for. Despite an incredible drive from Adrian Willmott yet again, who was just 4.2 seconds off P1 and setting faster sector and lap times than the leading #55 Lister Jaguar in the first twenty minutes of the race, and beating his quickest lap time from the previous day by a third of a second; the Aston Martin DB4GT suffered gearbox issues on Tom Alexander’s outlap and was forced to retire onto the Bugatti Circuit. The retirement meant the car finished 48th for Race 3, out of the fifty-one strong grid.

Both team and drivers were devastated with the end result, going home 27th overall having consistently run in the top five all weekend with the car running faultlessly. Adrian Willmott declared the car “has handled the best it ever has”.