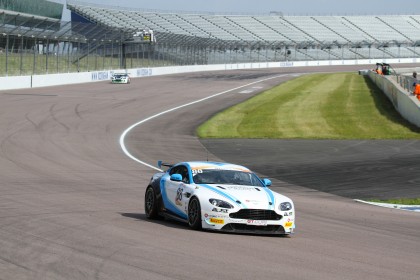 Friday saw Chris and Mika take to the track for the test sessions. Both drivers had instruction and guidance provided by the teams driver coach, Michael Bentwood. The day saw both drivers improve their times over the course of the day.

Saturday saw just Chris on driving duties as the races were both 25 minutes in length. The day started off with a practice session which saw Chris set a 1.29.615 which was 16th fastest for the session. Following the warm up Chris then lined up for the 20 minute qualifying buoyant after a good warm up session. At the drop of the flag Chris had bettered his time from the earlier warm up session and set a 1.28.661 which saw him start the first race 16th next to his main rival, the #9 Aston Martin driven by Gibbs.

The first race saw Chris put in a good, consistent race pace, securing 16th at the drop of the flag. The grid for the second sprint race was determined by your fastest lap in race 1. For the second time today Chris would line up along side the #9 Aston Martin. Before the first lap was three corners old, the red flag was out due to a 6 car crash at the Dene Hairpin. After a lengthy delay in which 4 cars were forced to retire due to damage sustained. Once the race got underway Chris was able to again put in a consistent performance.

Sunday saw the clouds clear and bask the Northamptonshire circuit with sun. Team manager Nathan Harrison drove the car in the 10 minute morning warm up. Nathan, who had raced at the circuit a week previously in his usual car, was able to set a 1.30.007.

Chris was first up in the #88 Aston Martin, after just 2 laps the safety was deployed after the #55 Porsche of Baker was left stranded in a dangerous position. Luckily the volunteer marshalls, without whom no racing would take place, were able to move the car to a place of safety within a lap and saw the safety car pit almost immediately after being deployed.

Our strategy saw Chris pit and hand over to his son, Mika after 16 laps of the 1.94 mile circuit. Chris’s fastest lap was 1.30.330  which was set on lap 12. Chris was able to lap within a second of his time for his whole stint, which takes a lot of skill and concentration.

The next round of GT Cup is at Oulton Park on the International layout on the 23rd July.