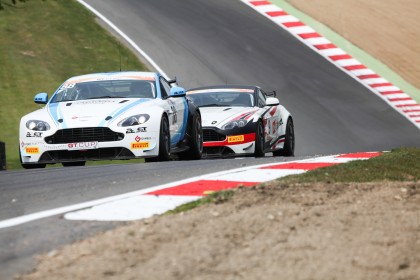 The second round of the GT Cup takes place at Brands Hatch and pairs up with the infamous Blancpain GT series to provide a seriously exciting weekend of racing. With such a large series being present there was a buzz around the track with supercars everywhere you looked, including an Aston Martin Vulcan, a V-12 track-specific hypercar of which only 24 will be made. It’s safe to say when that was going round the track people were paying attention!

After an up and down weekend in Donnington Chris and Mika just wanted to get as much track time as they could and soak up the first (and only?) hot weekend England had to offer. With no track session the day before Chris was thrust into the car first in the practice session on a track he hadn’t been on in months on cold, fresh slick tires…sounds like fun right? After 15-minutes Chris brought the car in unharmed and Mika went out on a different set of fresh slick tires as well. Now Mika has a reputation for not being the most reliable driver on new tires, but all that was abolished when he managed to set a new personal best and actually make it onto the track without spinning the car or putting it into a fence – nice one! Saying that, he was rewarded with no air conditioning and a sense that the beers with dinner the night before maybe weren’t the best idea when being thrown around in a race car.

When it came to qualifying the father-son pairing stuck to the same system as used previously – let Mika go out and warm the car up then let Chris come in and set the fast lap. Sadly, this didn’t work for the second time in two races after another competitor had an incident and got their car beached in gravel, leading to the session being red-flagged. Once the track was cleared and the drivers were allowed back out there was only a few minutes remaining and not enough time for Chris to set a fast lap. The team finished qualifying with a best of 1:43.080 to put them p20 overall and p5 in class with plenty more time to be gained.

Chris took on the first sprint race of the afternoon and quickly found out the pace of the cars in front weren’t going to wait for him through the first corner! He managed to keep his cool and re-join the pack through Druids and Graham Hill bend and was looking to work his way back up. One corner later, coming round Surtees, Chris was delightfully greeted with two Porsche’s facing the wrong way on the track and staring straight at him! Thankfully he made his way past and got back onto the others as the safety car was brought out. When the track was cleared and racing resumed it became very clear Chris was in a battle with a fellow Aston Martin GT4 as they were both lapping within less than a second of each other. The two battled for 20-minutes, with Chris not giving up any room and not letting the other car through by executing some brilliant blocking moves on some of the circuits faster corners. Chris managed to hang on to the end of the race and was visibly tired from 25-minutes in such a hot car, although it was difficult to tell if the water dripping from his face was sweat or tears of happiness from holding off the other Aston Martin.

The second race was Mika’s turn to get out in the car, but he didn’t have as much of an exciting race as the previous one due to the sheer differences in lap times. Regardless of this Mika still thoroughly enjoyed his 25-minutes out on track and took it as an opportunity to get some experience of Brands Hatch and try to set the best lap time he could. In doing so, Mika managed to post a best lap time of 1:38.504, beating Chris’ best time and setting the year standings at 1-1.