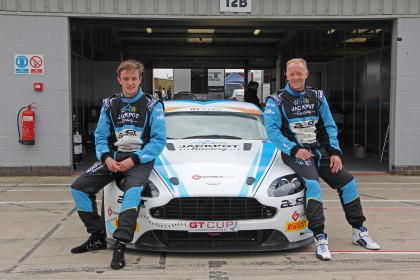 After an encouraging test day, 22GT Racing had another fulfilling weekend at Northampton’s Silverstone National circuit during the third instalment of the Bute Motorsport’s GT Cup championship (28-29 May).

The father-son driver duo of Chris and Mika Brown took advantage of former 22GT Racing driver Michael Bentwood on the Friday, with both drivers improving their lap times throughout the day. Free practice on Saturday morning saw the pair complete 24 laps of the 1.64 mile circuit, before going out for qualifying. Disappointed Mika did not improve on his fastest practice time of 1:02.503, but a 1:02.684 gave the duo a spot on the 12th row for the first 25-minute sprint race of the weekend – alongside Brent Millage’s Ginetta G55.

Due to issues with Staveley’s Porsche 991, the #88 Aston Martin GT4 had already gained a position before the 25-minute race had even begun. Just three minutes into the race, the Safety Car made an appearance as the #58 McLaren of Garage 59 was seen with flames pouring from it. Unfortunately, #88 and #30 were mistakenly picked up by the safety car, meaning the gap to P22 grew to over a minute. Fortunately for Brown, the safety car remained out on track for a while longer, allowing him to pass and then catch Millage, as he looked to climb further up the grid.

Lap 12 saw the safety car return to the pits, with Brown eager to return to full race pace; improving his lap times over three consecutive laps and extending his lead on Ali’s Cayman GT4 to 10 seconds. With five minutes remaining, the #18 Huracan made a visit to the pits with issues, only for the #12 Audi R8 to spin into the gravel seconds before the chequered flag allowing Brown to take P19. A last push for Brown on his final lap meant he squeezed in a fastest lap time of 1:03.335.

The second sprint race of the weekend saw Chris’ son Mika to take the wheel. Once again, the #88 Aston Martin GT4 lined up next to the #54 Ginetta of SPY Motorsport, but this time on the eleventh row – in 22nd place.

Mika was exceptionally quick to find his race pace, taking just three laps to improve upon father Chris’ quickest lap time from race 1 – setting an impressive time of 1:02.980, keeping within a second of Millage. However, Millage seemed to still be finding his pace, increasing the gap between the Ginetta and the Aston. Christopher’s Ferrari 430 Challenge was forced into retirement on Lap 5, giving Brown an extra position, whilst race leader Chamberlain also found himself unable to finish as his Porsche began smoking and retired on Lap 9, allowing Mika to take P19 as the gap to P18 grew even larger.

Whilst Brown demonstrated consistent pace, it wasn’t enough to catch up with the Millage’s Ginetta, who was up to 3 seconds a lap quicker than Brown. However, just like dad Chris, Mika did set his quickest lap time of the race on his 23rd and final lap: 1:02.237 to finish 20th overall and 6th in the GTA class.

Sunday’s race schedule kicked off with team manager Nathan Harrison taking the 4.7 litre V8 machine out on track for the warm up session. More familiar with racing Toyota MR2s, Harrison set the quickest lap time out of the two Aston Martins (#88 and #9) with a 1.04:355.

It was business as usual for qualifying, as Chris and Mika split the 20-minute session. However, repeating the previous days experience, it was Mika that set the quickest lap time out of the pair (1:02.656), on his last lap of the session. Whilst father Chris was 0.8 second off son Mika’s pace.

The pair qualified 23rd, once again behind Brent Millage and the second Aston Martin in the field (#9). However, due to ongoing fuel pump issues, the Gibbs/Horlor Aston Martin was unable to start the 50 minute race – as was the Ferrari 430 Challenge of George and Andrew Christopher.

Chris Brown started the 50-minute race for the 22GT Racing Aston Martin, who found himself eight seconds behind Brent Millage after 4 laps. A spin for the #74 GTC Porsche on the pit straight, saw Paton slotted between Millage and Brown. As Chris continued to get up to pace, he moved up the grid as the #50 Ginetta of O’Brien pitted with damage, although a spin for Darren Nelson on the 9th lap in the #18 Lamborghini Huracan at Copse led Brown’s Aston into a spin. Having added around 33 seconds to his lap time, Brown Snr still managed to maintain P20 and an 18 second lead on Ali (#30).

Due to a spin for Chamberlain in the Porsche 935, and contact with the Bentley Continental GT3 of Jordan Witt, the race leader found himself amongst the GTA pack after pitting, just 0.5 second ahead of Brown’s Aston. Whilst a second spin for Paton’s Porsche put Brown up to P19 as the #74 car fell down to P20. Repeating the previous day’s performance Chris Brown set his quickest lap time of 1:02.585 on his final flying lap, before handing over to son Mika.

Whilst Mika struggled to break the 1:03 barrier in his first few laps, and unable to keep the #74 GTC Porsche behind him; with 22 laps complete, a retirement for Richard Chamberlain and the GTO Porsche 935 gave P19 back to Brown. Whilst a further retirement on Lap 36 for Smith’s Porsche 997 meant Mika moved up to their highest position of the championship to date, not even a trip onto the grass with 10 minutes left on the clock could change that. Unbelievably, Mika Brown went on to make his final lap his second fastest, having set his fastest lap time on Lap 32 (1:02.435), finding himself just 2.3 seconds off GTC Class leader Ross McEwan. After yet another encouraging race from Chris and Mika Brown, they finished the 50-minute race in 18th position overall and 5th in the GTA class.

Chris and Mika Brown are currently 5th in the GTA driver standings. The next round is Rockingham on 18th & 19th June 2016.