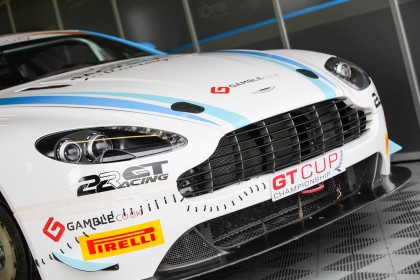 After gearbox troubles hampered Friday’s test session, the race mechanics of 22GT Racing, based in Derby, worked well into the early hours to get the Aston Martin Vantage GT4 running for the weekends racing. However, gearbox gremlins returned during Saturday’s qualifying session as Chris Brown went off into the gravel at turn one which ultimately resulted in the withdrawal of #88 from race one for which they qualified 22nd.

With the car back in full working order for the second of the weekends sprint races, Chris Brown lined up at the back of the grid, but quickly gaining a place on the #54 Ginetta. Although the race was promptly interrupted as the #35 and #23 collided at the esses, giving the Yorkshireman the chance to catch the pack having fallen back to P23. As racing resumed, Brown went on to set seven consecutive fastest lap times whilst gaining one position on the #17 Cayman GT4 and gaining a 34 second lead on Nevinson’s Porsche during the 25 minute sprint race, including a fastest lap time of 1:15.935.

Sunday saw the first 50-minute race of the GT Cup season, with brief spells of drizzle appearing throughout the day which saw Mika reluctant to go out on slicks for the first half of the morning’s 20-minute qualifying session. However, a dry line soon appeared from the morning support races and Mika finished his qualifying stint with a 1:16.2 lap time, which was promptly improved upon by dad, Chris, completing the 1.98 mile circuit in 1:15.5 with the session declared wet with just over minute remaining – leaving the pair to start from 20th on the grid alongside the Nevinson’s Trackfocused Porsche GT4.

A withdrawal for Richard Chamberlain’s Porsche 935 meant that that Chris Brown started from P19 for the 3pm race. With 10 minutes elapsed Brown was up to P17 having passed the other Aston Martin Vantage GT4, driven by Gibbs, plus an early retirement for Gareth Downing’s Lotus Evora. Despite getting repeatedly lapped by the aggressive GTO cars, Brown maintained his impeccable focus, refusing to be intimidated and repeatedly and consistently improving his lap times to end his race stint with a 1:15.2 before handing over to son Mika. Lap 26 saw another retirement, in the form of Andy Christopher’s Ferrari after a spin at turn one, giving the #88 Aston Martin P16 which then dropped back to P17 after losing a place to Horlor in the #9 Aston. However, a late retirement for the #28 Ferrari 458 in the final minutes of the race meant the Brown duo finished their final race of the weekend in 16th position overall and 8th in the GTA class.

The next GT Cup round will be held at Brands Hatch, Kent on 7th/8th May 2016, as the main support race for the prestigious Blancpain Sprint Series.