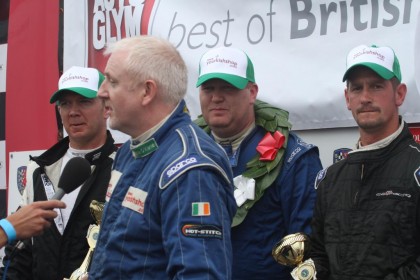 Normally during this 15 minute session I try to get a quick time in early on and then sit out the remaining time hoping that my lap time is good enough. With most of the quicker MR2 drivers racing on the Saturday in the Nippon Challenge and being used to the track and conditions prior to qualifying I decided to use the full 15 minutes to get up to speed. My last qualifying lap was my fastest which was good enough for 7th position on the grid even though it was 1.1 seconds quicker than my qualifying time in 2012.

After the initial race being red fagged after 9 minutes the race was restarted for a period of 6 laps.

At the end of the first lap I had jumped into 5th position, after the second lap I’d moved up to 4th (3rd in the MR2 class) pressuring the Mr2 in front  for the remaining 2 laps until the chequered flag was waved.    –The video for this race is in our video section.

An hour before we raced the heavens opened and was still lashing down when we left the collection area for the grid form up. We had 2 green flag laps as conditions had changed from the earlier qualifying and race sessions.

I got a mega start and moved up to 2nd position initially dropping to 3rd by the end of the lap, the next couple of laps I paced myself with zero visibility with the spray from the lead cars, I tried to learn where the grip was on the circuit, by lap 4 I’d dropped to P6. Feeling more confident I picked up the pace and the 3 next laps was able to pass a lead car on each lap, this put me in 3rd position by the 8th lap. The next two laps saw me catch the leaders as my quick lap times and their battling had drawn us together.  Unfortunately as I pressed on to catch them I went into the Esses too fast and lost the rear end, I was able to keep the car from hitting anything but unable to keep the engine running which stalled. I was unable to get the engine restarted so retired from the race.

The following lap the chequered flag came out as ¾ of race distance had been completed and due to safety the race was cut short to 11 minutes.

The video for this race is on Youtube- Mr2 Race Series Mallory Park, Nathan Harrison.

Pictures for this event are in our Gallery section.